API testing is hard, but it doesn’t have to be. Postman makes it easy to write tests, make sure they’re working, set up the testing environment, and then eventually hook it all up to your build system. More than ever before, developers are using Postman tests in their Continuous Integration or Continuous Delivery pipeline.

CI is a practice that requires developers to integrate code into a shared repository several times a day. By committing early and often, the team avoids a ton of technical debt by allowing teams to detect problems early while conflicts are relatively easy to fix. Every check-in kicks off an automated build process which typically includes testing and (if your commit hasn’t broken anything) might include deployment too.

Postman has a number of tools to make API testing easier. Postman has a testing sandbox that lets you write and execute tests for your API, and Newman is Postman’s command line tool that sends API requests, receives the response, and then runs your tests against the response. We won’t dive into the details of setting up a collection or writing tests, but here’s a tutorial on writing tests if you’re just getting started.

In general, integrating your Postman tests with your favorite continuous integration service is the same process if you’re running on Jenkins, Travis CI, AppVeyor, or any other build system. You will set up your CI configuration to run a shell command upon kicking off your build. The command is a Newman script that runs your collection with the tests, returning a pass or fail exit code that’s logged in your CI system.

In this example, we’ll walk through how to integrate Postman with Travis CI, a continuous integration service used to build and test projects hosted on GitHub. Travis CI will run your tests every time you commit to your GitHub repo, submit a pull request, or some other specified configuration.

Before we get started:

Hooking up Postman to Travis CI

Travis CI is now set up to run your Postman tests every time you trigger a build, for example, by pushing a commit to your repo.

Let’s try it out. The Travis CI build status page will show if the build passes or fails:

Travis CI is running our Newman command, but we see a failed exit code (1). Boo.

Stay calm. Let’s review the logs in Travis CI. Newman ran our tests, we see the first and second tests passed, but the last test Updated in the last day failed.

Let’s go back to our Postman collection and fix our Updated in the last day test. Once we fix the mistake in our test, let’s save the changes, update the repo with the latest collection file, and then trigger a Travis CI build once again by committing and pushing the change. 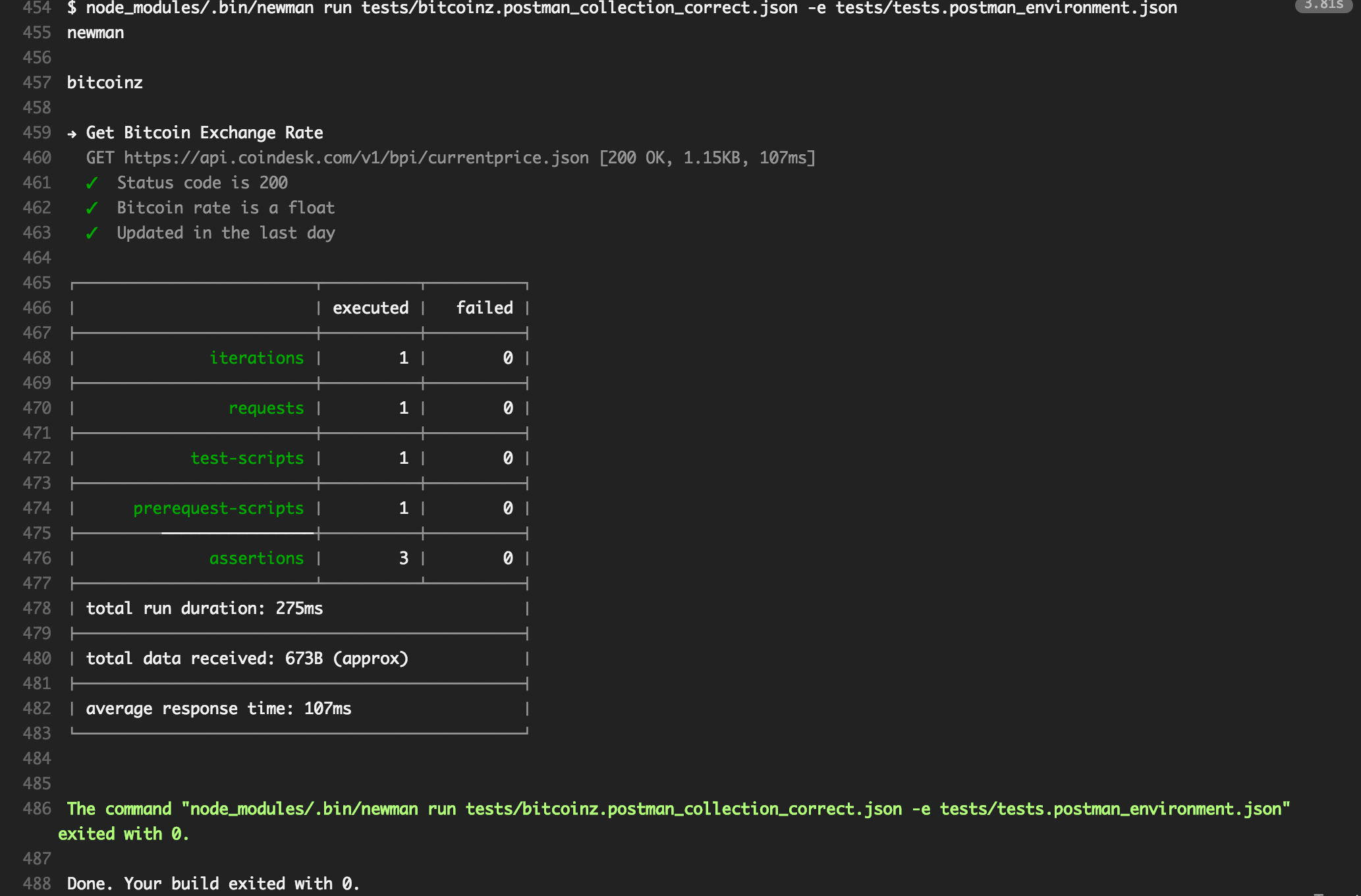 And it’s working! All our tests passed and the command exited with a successful exit code (0).

During development, it’s kind of a pain in the butt to manually update your repo with the updated collection file every time you make a change to your collection. Here’s 2 tips to help ease that pain.

The Postman API Platform allows you to build and manage your API across different stages of the API lifecycle. Continuously building upon…

Today, APIs are the building blocks of modern software and business—having evolved beyond just a mere interface to become fundamental in expanding…