Read and write to REST-enabled databases 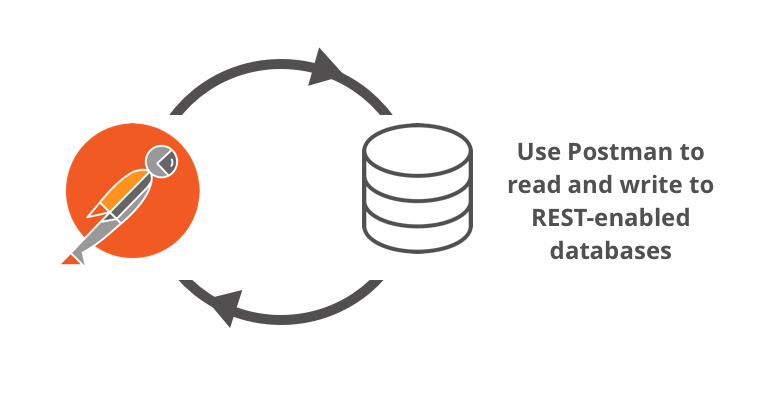 Why would you want to do this? During development when you’re working with a local version of your database, you can use Postman to read and write to your database and make assertions about those responses. In this manner, you can test the internal state of your database that isn’t exposed by your API. Furthermore, using Postman can be a faster way to learn and use the database for someone who’s unfamiliar with SQL.

There are 2 ways to access your database using Postman:

Setting up the database in Restdb.io

In their quick start guide, Restdb.io walks through setting up a database, creating a restdb.io collection (an abstraction similar to a database table), and adding fields to the collection.

Once our database is set up, we will have a unique URL as its main access point, such as https://example-5a1e.restdb.io, that we’ll need for the next step.

In this example, I’ve created a restdb.io collection called contact and entered some records containing fields like name, email, and photo. Setting up Postman to hit the database

In the Postman app, enter the URL from the previous step into the request builder. If you’re going to be switching between with different server environments or databases, consider swapping out path elements for environment variables using a double curly brace syntax. The full URL should look something like this: <main-access-point>/rest/<collection-name>. Under the Headers tab, specify your Content-Type as application/json.

Still under the Headers tab, add your x-apikey along with the value of your restdb.io key from their Users and Settings page for the database. In Postman, you can paste the key directly in the field, or store it as an environment variable like we did in the first step. Now, Postman is ready to send a request to your database. Hit Send and inspect the database API’s response. Just like testing your API to ensure responses are successful and as we would expect, we can add some tests to make assertions about your database responses as well.

For example, if we added a new field called active, but didn’t plan to expose it to our users via API, we could test if this new field exists with a database query using Postman. 6 thoughts on “Read and write to REST-enabled databases”

Throughout every stage of the development process, there are unexpected bumps and setbacks. These often delay or completely halt progress. As we…

During a recent Postman livestream with the senior director of engineering at Mercari, Dr. Gleb Bahmutov, PhD, we wrote frontend and API…